”Music-Fiction” is a concept invented by Thierry Van Roy : the re-writing of History and, in the process, the creation of the music which might have developed if History had taken that route.

This new form of musical creation is unlimited : if you change one or several elements of the past, the present or the future, you arrive at a fictional change in the face of the world and thereby in music, for music always results from the interaction between cultures that takes place at the mercy of the transformations in the history of civilisation. 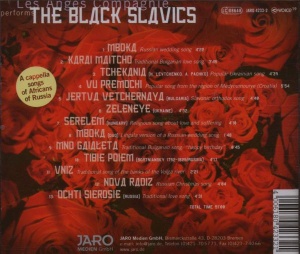 “The Black Slavics” represent the music of those Africans and their descendants who settled in Russia. Czaristic law prohibited them from singing in their mother tongue or singing their own religious music, which was considered too rhythmic for the church’s liking.

“The Black Slavics” have adapted Russian songs to their own style and you will hear that long transformation from Russian into African song, rescued from oblivion by the Georgian musicologist Kajnun Marimov. This Project is an example to the of the ”Music-Fiction” concept invented by Thierry Van Roy.

And what if the “Black Slavics” really had been deported to Russia and founded a new style of music whose influence continued to be felt down to the present?

The Black Slavics project is interpreted by the choir LES ANGES COMPAGNIE. In most of the songs, the first part presents the traditional version in polyphony and in the original language (Russian, Croatian, Ukrainian, Bulgarian or Hungarian), while the second part traces its evolution as brought about imaginarily in Lingala/Emdash, one of the most widely spoken languages of central Africa. These interpretations of the Slavic songs were all improvised on the day of the recording

Taiga Maya has collected the only remaining archives of the Circadian World pre-dating 2012.

Finally completed, this large fresco tells a story through music and virtual images, the story of our ancient world where day and night were still alternating…

Taiga Maya, a CD + DVD + “The circadian world”, a fictional short story, and an extensive booklet with many photos. Illustrations by Jean Detheux. Published by Naive, France 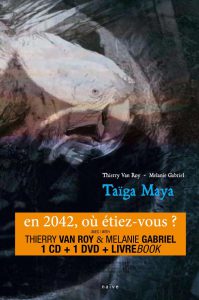 Tchekala is certainly the first encounter of Ukrainian and Moroccan music. Historically, for centuries, the Ukrainian Kozaks fought and pushed back the Tatars and other Muslim forces.
Today, the Arabs invade Ukraina for the first time, but armed with oûds, darbukkas and violins. In some of the songs, the strange throat singing of Mongolia and the Indian tampura will lead us farther eastwards.
The music presented by Tchekala is composed of rare and unrecorded songs from the family heritage of Borys Cholewka and Sophie Tabakov, as well as of well known (but totally rearranged) Slavic songs.